The cordless orbital sander is possibly the most convenient type of sander you could find on the market. They, most importantly, don’t require to be connected to a power outlet, meaning that they could be used anywhere. 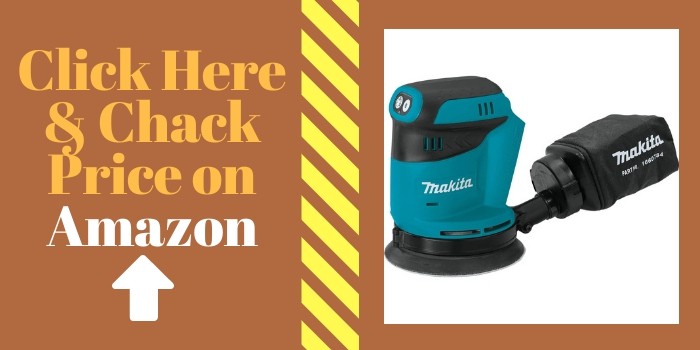 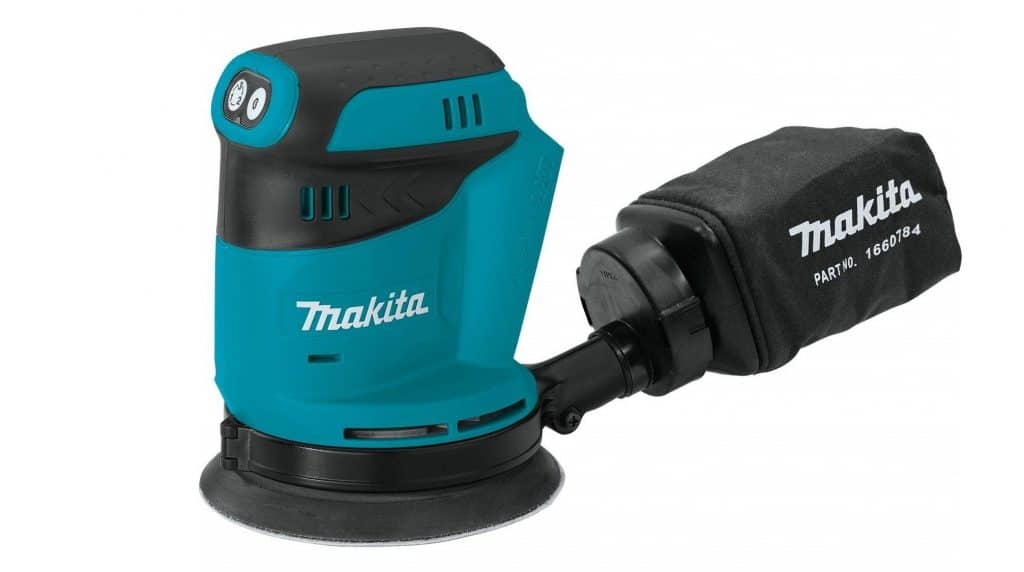 Let’s now proceed on to our review so you can see whether or not this orbital sander is the best choice for your needs!

Though this unit didn’t make it to our best random orbital sander guide, it still has some quality features. Let’s have a look.

Makita XOB01Z sander features random orbital sanding action. Aside from spinning the sanding head, this device also moves it in small ellipses to ensure that the sanding disc doesn’t travel the same path twice. Because of its 1/8-inch orbital action, Makita orbital sander doesn’t produce swirl marks. Besides, the texture of the wood grain doesn’t matter for this tool. This, on one hand, would allow the sanding of wood pieces with a rough surface. On the other, you could easily sand several pieces of wood that are to be fastened together.

Makita orbital sander works with 5-inch, 8-hole hook-and-loop sanding discs. Those discs are easy to put on and take off from the sanding head, but you will have to make sure to align the holes on the paper with the holes on the sanding head. Makita includes one 5-inch 120-grit abrasive disc with their sander. If that’s not enough for you, you could buy other kinds of sandpapers to use with this tool as well.

Makita random orbital sander operates on three speeds– 7.000, 9.500, and 11.000 orbits per minute (OPM). The speeds are switched via one single button. When you press the button with the device off, it automatically goes into the highest setting. To move to the lower settings, you would need to push the button again. Some people may prefer sanders where the sanding speed is adjusted via a separate dial. However, pressing the button twice or thrice to go to the lower settings would most likely be easier than setting the desired speed mode and then turning the sander on. Besides, sanders are mostly used on their highest speed setting, so it makes sense why Makita decided to put one-button speed switching in their sander.

Makita XOB01Z random orbit sander has an ergonomically shaped body for more convenient grip. That’s certainly a nice feature since you would often need to sand for a pretty long time.

Makita random orbit sander employs a dust collection system that guides all the dust from the workpiece into the included dust bag. The dust bag is pretty remarkable since it doesn’t have baffles in it, which basically makes it just a piece of cloth. Thanks to this, the dust bag of the Makita random orbit sander appears to be much easier to clean since you won’t have to deal with the nooks of any baffles. Instead of the dust bag, you could use a vacuum or pretty much any other device that can be connected to the dust port of the sander. The dust port of the XOB01Z orbital sander is connected to a skirt right above the sanding head. This skirt can be set to 12 positions, so you could adjust the orientation of the dust hose in a variety of directions in order to provide you with more room during work.

Remarkably, Makita XOB01Z orbital sander operates on Makita 18V Li-Ion batteries that run for up to 40 minutes on low speed and up to 20 minutes on high speed. However, keep in mind that Makita doesn’t include a battery or a charger with this sander. If you happen to have other Makita tools that use batteries, then you probably won’t have to worry about buying one. Otherwise, you would also need to purchase both a battery and a charger for this orbital sander.

The battery is installed on the back of the sander right above the dust port.

No, it doesn’t. The only maintenance you need to do is empty and clean the bag when it is full.

If you need as much freedom of movement as possible, then there is no better choice than a cordless sander. For household uses, a cordless sander would make less sense since it is easier to keep it connected to a power outlet at home.

However, not having to deal with cords is certainly nice. Plus, you will be able to use the sander anywhere. Just keep in mind that you won’t be able to work for a very long time due to the limited battery life.

As our Makita orbital sander review demonstrated, Makita XOB01Z is a pretty good random orbital sander. Firstly, it is fairly inexpensive. Secondly, it doesn’t require any power source since it operates on a battery. Lastly, it doesn’t leave any swirl marks on the woodwork since its head is designed not to move over the same point twice.

The XOB01Z orbital sander could be an excellent choice for a variety of woodworking projects. And if you liked its features, then maybe you should buy it! You can get more information about orbital sander for finishing.

Home & Tools will provide you with the best and satisfactory ideas to improve the decoration of your home. Whatever you are a home improvement worker or trying to decorate your home by yourself, you will find our stuff helpful.

You May Also Love To Read

You know what, figuring out where to put your desired furniture in a specific space can be a challenge. Your room sounds big enough that you think you’d have enough space for the right arrangement. …

END_OF_DOCUMENT_TOKEN_TO_BE_REPLACED 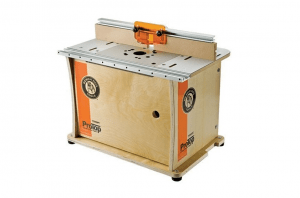 A good router table would really come in handy if you need to do delicate wood-shaping projects. Without a router table, it would be much more difficult and even impossible to precisely shape woodwork …

END_OF_DOCUMENT_TOKEN_TO_BE_REPLACED

As a woodworker, when you will work in your shop, sometimes you will need to work with different kinds of heavy tools or machines. Work with such kinds of heavy equipment is not easy or simple work. …

END_OF_DOCUMENT_TOKEN_TO_BE_REPLACED

The Home And Tools is a participant in the Amazon Services LLC Associates Program, an affiliate advertising program designed to provide a means for sites to earn advertising fees by advertising and linking to Amazon.com. *Amazon and the Amazon logo are trademarks of Amazon.com, Inc., or its affiliates.

Home & Tools is one of the best home improvement products reviewing sites. You will definitely find our stuff valuable. Just remember one thing, we deal to make you feel!